What You Need To Know About Canine Cough 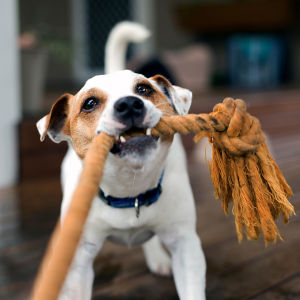 There really is nothing worse than your pet being under the weather. Especially with all of the scary names and information floating around, it can be a really overwhelming experience. Being knowledgeable on common illnesses seen in dogs is a great way to make this time less stressful for both you and your pup! Today, we want to share some information on a common canine virus we’ve seen this summer- Canine Influenza.

Canine Influenza goes by a variety of names- CIV, Canine Cough, and Kennel Cough being the most common! It is defined as a “highly contagious viral infection affecting dogs and also cats.” There are currently two strains present in the United States- H3N8 and H3N2. Both strains can be traced back to flus that infected other species, meaning that influenza learns how to infect different species over time. H3N8 was originally seen in Floridian racing greyhounds in 2004, and is thought to have crossed species from their equine racing counterparts. H3N2 was first seen in the Chicago area in March 2015, and is thought to have originated in Asia in 2006-7, most likely having crossed species from birds. Despite both strains having originated in other species, there is no evidence that either of these strains can cross to humans at this time.

Canine Cough is transmitted from droplets or aerosols containing respiratory secretions- which is a fancy way of saying by coughing, drooling, barking, or sneezing. Because this virus can survive on surfaces for up to 48 hours, dogs can also come into contact with Canine Influenza via people or objects that have touched infected dogs. H3N8 has an incubation period of 1-5 days, with most symptoms appearing in the 2-3 day range, while H3N2 has an incubation period of 2-8 days. Dogs are most dangerous during this incubation period, when it is unknown that they are infected, but are still shedding the virus. Some dogs may not even show symptoms at all, but still have the ability to infect others!

80% of dogs that come into contact with CIV become infected. Although, the other 20% could very well be infected and simply not show symptoms. Most dogs exhibit the mildest form of Canine Cough- a cough lasting 10-21 days, discharge from the eyes and nose, lethargy, and a fever. Some dogs may become more severely infected- a high grade fever of 104-106 and increased respiratory rate and effort. Some vets may recommend antibiotics, but most of the time, dogs recover from Canine Cough on their own within 2-3 weeks time. The best thing to do if your pup is feeling under the weather is to make sure they’re eating, drinking, and getting as many snuggles as possible!

Looking for some more information? Check out our source for this post at https://www.avma.org/resources-tools/animal-health-and-welfare/canine-influenza.